Use this frosting for cakes or cupcakes, or pipe it onto cookies, brownies, and bars. Make a large batch or a small one—it’s far less sweet than American buttercream and tastes fantastic! It is light in texture and soft but sturdy enough for piping, and it's not cloyingly sweet. There is no question why Swiss meringue buttercream is preferred by most bakeries and pastry chefs.

Swiss buttercream can seem like a tricky frosting to make for a lot of people as there are some things that can go a little wrong. The good thing is, that there is usually an easy fix for all of the issues!

And once you master it, you won't want another frosting! There is a FAQ section in this post to answer troubleshooting questions.

What is Swiss meringue buttercream?

Swiss meringue buttercream (SMBC) is made by gently cooking egg whites and sugar in a double boiler until the temperature reaches around 160°F (71°C) on an instant-read thermometer/candy thermometer. The mixture is then whipped into a stiff meringue.

Lastly, lots of room temperature butter is whisked into the meringue, a little at a time, until the mixture comes together into a cloud of delicious frosting. Swiss meringue buttercream can be flavored how you like it - with chocolate, coffee, caramel, brown butter, vanilla, lemon...

This chocolate SMBC can be flavored in two ways - with melted chocolate. It can be dark chocolate, milk chocolate, or make white chocolate Swiss meringue buttercream.

The ingredients amounts for this chocolate buttercream are listed in the recipe card at the bottom of this post. Here is a rundown of what you will need.

There is a lot of whisking involved for this chocolate Swiss meringue buttercream, and for long periods of time.

For best results, you'll need a stand mixer with both a whisk attachment and a paddle attachment. It is possible to do with a hand mixer and a mixing bowl but be prepared for it to take a very long time.

Step 1 - Firstly, check that the bowl of your stand mixer is very clean with residual grease from previous recipes. Giving it a wipe down the sides of the bowl with a little white vinegar or lemon juice can help remove any grease. Bring a pot of water (with 1 inch of water) to a simmer.

Step 2 - In the bowl of a stand mixer, add egg whites and granulated sugar. Balance the bowl over this simmering water bath. Whisk continuously as the egg whites warm-up and keep whisking until all the sugar has dissolved or the temperature reads 160°F (71°C) on an instant-thermometer. Don’t stop stirring or some egg whites may overcook on the edges of the bowl.

Step 3 - Place the bowl of cooked egg whites in your stand mixer fitted with the whisk attachment and beat on medium-high speed until a meringue with stiff peaks forms and the meringue has cooled down to room temperature. When you touch the sides of the bowl they shouldn't feel warm.

Step 5 - With the mixer on medium-high speed, feed in a cube of room temperature butter at a time, allowing it to incorporate fully before adding the next cube.

At this point, the meringue can suddenly appear split or curdled and look like cottage cheese. Just keep beating the mixture until it comes together into a thick and cohesive buttercream. This can take a lot of beating so don't give up if it doesn't seem to come together - it will.

If after 15 minutes it really isn't coming together and is still curdled your butter may have been too cold. Place the bowl back over a hot water bath for a minute or two to slightly warm the edges of the bowl and melt a tiny bit of the butter. Place it back on the mixer and beat until creamy.

Step 6 - Once the mixture is thick and cohesive, beat in the melted chocolate, salt, and vanilla until thick and fluffy.

Step 7 - Switch to the paddle attachment and beat on low speed for 10 minutes to remove some of the larger air bubbles in the buttercream.

Store chocolate Swiss meringue buttercream in a covered bowl at room temperature for 1-2 days, as long as the room doesn't get too warm. Store it in the fridge or freezer if your kitchen is hot until needed.

As the buttercream cools in the refrigerator, it will become hard as all the butter in there has solidified. Bring it back to room temperature and whip it to make it creamy again. You can leave it to sit out and warm up for a few hours, or you can gently warm the bowl of buttercream over a hot water bath until the buttercream edges in the bowl begin to melt.

Once the edges have melted, place the bowl back in the stand mixer and whip it for 3-5 minutes until creamy again. If the mixture appears to split and become curdled, the butter is still too cold and it will need a little more warming.

If it becomes soupy and liquid it has warmed too much, so place it back in the fridge to cool it down. Whichever way it swings, there's a fix for it, you just need to get it at the right temperature.

Why is my Swiss meringue buttercream soupy and liquid?

If your buttercream is too warm, it will melt and become soupy buttercream. To fix this it needs to cool down. Refrigerate the bowl of buttercream for around 10-20 minutes (depending on how soupy it was) until the edges of buttercream in the bowl harden up. The middle of the buttercream may still be runny but it will come together when it is whipped.

Why did my buttercream curdle when adding the butter?

If you're in the process of making the buttercream, it's quite common for the mixture to split as the butter is being added in. Just keep beating it until it comes together.

Why has my refrigerated SMBC curdled?

Warm it up gently over a hot water bath until the edges begin to melt, then whip it until creamy. If it's still curdled, melt it a little bit more and try again.

Why does my SMBC taste greasy?

It is too cold again and the butter has solidified too much. Warm it up over a hot water bath until the edges begin to melt and then whip it again until creamy. Underwhipping your buttercream can also be the cause.

Can you freeze Swiss meringue buttercream?

Yes, freeze in an airtight container for up to 3 months. Warm to room temperature then beat until creamy.

Can you overwhip Swiss meringue buttercream?

This recipe can be halved for a small-batch chocolate Swiss meringue buttercream. The egg whites will cook a lot faster and cool faster.

This is an informational estimate only. I am not a certified Dietitian or Nutritionist 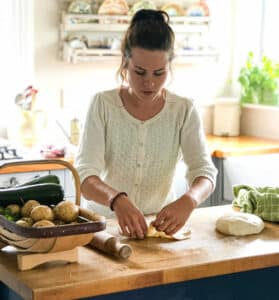