This Belgian waffle recipe, leavened with yeast makes the best waffles that are crispy on the outside with a light and fluffy interior.

Before we dive into this yeasted Belgian waffles recipe, know that there are two main types of waffles you can find in Belgium - Brussels Waffles and Liege Waffles.

This crispy waffle recipe is for making light and airy Brussels waffles. If you haven't tried a yeast-based waffle before, you're in for a treat.

What’s the difference between Brussels waffles and Liege waffles

Brussels waffles (known as Brusselse wafels) are amazing waffles, named after the capital of Belgium. It is not a regular waffle, these are the best Belgian waffles. They're super light and airy with a crispy outside and make one of the best breakfast foods.

They use a yeast-leavened batter, are traditionally rectangles, and feature deep wells in which to hold powdered sugar and other fillings. There are so many waffle shops and street vendors in Belgium selling Brussels waffles, they are such a popular street food.

The batter for this waffle is like a pourable cake batter that fills up all the grooves in the waffle iron. In the United States, many waffle recipes claim to be Belgian, but they're often not made with yeast which will never give the same flavor.

A Liège waffle (Luikse wafels) is very different. It is also known as a sugar waffle. Though they have a similar grid waffle pattern to Brussels waffles, Liege waffles are denser and very sweet, almost like sweet pastry or bread.

The homemade Belgian waffles have yeast as the leavening agent instead of baking soda or baking powder. This makes lighter waffles, with extra flavor. You can use instant yeast or active dry yeast. Yeast gives an airiness to the waffle and a unique texture, it creates a crispy outside and adds a lot of flavors.

The batter for the waffles is best prepared the evening before and placed in the refrigerator overnight for overnight yeast waffles. This long and cool ferment lets the batter rise slowly and increases the flavor the following day.

Find the actual ingredient amounts written in the printable recipe card at the bottom of this post. Here is a rundown of what you will need.

In a saucepan combine the milk and cubes of butter. Warm it over medium-low heat until the butter has melted. Take it off the heat and stir the milk and melted butter to let it cool slightly, then pour it into a large bowl.

To the warm milk mixture add the yeast, sugar, salt, all-purpose flour, and eggs and whisk them together until combined. It will be a bit lumpy and that is fine. Cover the bowl with a lid or a plate and place it in the refrigerator for an overnight rise.

For same-day waffles, let the waffle batter rest on the bench at room temperature instead, for 2 hours or until doubled. This way is much quicker but they won't be as flavorful.

Take the batter from the refrigerator and stir it with a fork to deflate it. Add 2-3 tablespoons more milk to the waffle mix to create a pourable cake batter consistency.

Preheat the Belgian waffle iron. Once hot, pour in approximately ½ cup of batter per waffle, though this will depend on the size of your waffle maker and the manufacturer's instructions. Bake them for 3-4 minutes until golden brown and crispy.

To keep your homemade waffles crispy, serve them the moment they come from the hot waffle iron. If they sit and cool down they will lose their crispiness. You can get them crispy again by placing them back in the waffle iron on low heat.

Leftover waffles can be stored in an airtight container at room temperature for up to 3 days. Waffles can also be frozen and reheated in the toaster.

Serve the yeast waffle with your favorite toppings. Brussels waffles are often served purely with icing sugar and eaten by hand, however, you can add many more toppings such as:

What waffle maker is best for Belgian waffles

You do need a special Belgian waffle maker to make the classic ones. Choose a rectangle waffle maker with deeper pockets. This will make the most traditional and airy waffles. If you have one that can flip upside down, this will create a much more even bake

Pour the waffle batter in, close the machine and flip it upside down for a minute, before flipping it back the right way round and continuing baking. This allows the batter to coat the top of the machine evenly.

Love waffles? Why not try sourdough waffles too? Or for another yeasty sweet treat try these buttermilk donuts or brioche donuts.

Or, if you're in the mood for pancakes instead, these sweet cream pancakes are so fluffy!

*The cup sizes given are for US cups. Note that these are smaller than metric cup sizes. For best results, use grams.

This recipe is written using grams as the main measurement.

If you don't have a scale US* cup equivalents are also included, however, using a kitchen scale to measure grams will give the best and most consistent results.*US cup sizes are smaller than metric cup sizes. 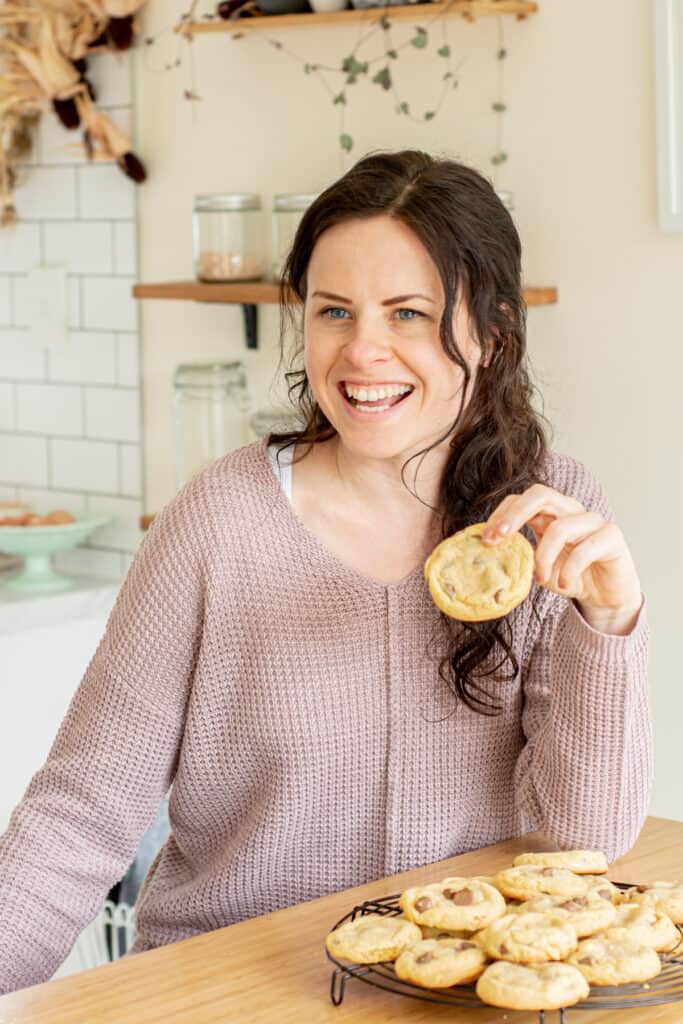